Welcome to this Ancient Parish Church.
The Vicar, Churchwardens and members of All Saints hope that you enjoy your visit here.

Whether you are just passing by and have just popped in for a few moments of peace and quiet, or are on an organised visit, or even tracing your family ancestry, do stay a while, sit quietly, and absorb the tranquility of this lovely building.

Reflect on the many thousands of Kempstonian’s who have worshipped here and maintained this House of God during the past nine centuries.
We ask you to remember in your thoughts and prayers the present Priest and congregation in this corner of England.

Traces of the small original Anglo-Saxon church can still be discerned in the exterior stonework. This early building was first altered by the Normans, probably by Judith, who was granted the Manor and lands at Kempston by her uncle, William I, in the post-Conquest period.

The North and South Aisles were added to the church during the 12th Century, but further major rebuilding took place in the 15th Century: the chancel was extended to its present length; the tower was raised in height to accommodate the bells; the clerestory was added to the nave; the large windows were created, so flooding the church with light for the first time; also, a porch with a room above was built over the south door. This great reconstruction left the church layout as you see it to-day, the only addition, in 1823, being a mausoleum on the North side of the chancelfor the Long family, which now serves as a vestry. 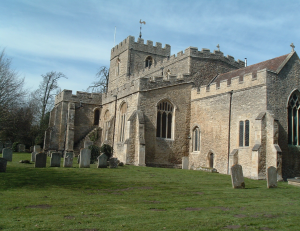 We are proud of our ring of 10 bells, the largest of which (the tenor) weighs over 17 cwt. The bells were re-hung in a new iron and steel frame between 1976/79 and are rung every Sunday for the main services. Visiting ringers can be assured of a warm welcome from Martin Whiteley, the Tower Captain, and the Kempston band.

The 14th Century stone font, with beautiful carvings of the Saints and the Apostles around its sides, was mutilated during the Commonwealth period by the soldiers and agents of Oliver Cromwell. One can still see the marks of the chisels used to wreak the destruction. The ornate, octagonal oak cover dates from 1901. 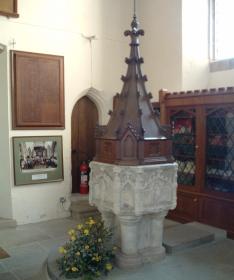 The collection of shields hung on the North wall are all that remain of the many that once adorned the interior of the church. Two are Royal coats of arms. The shields with Bishop’s Mitres on top are those of the Province of Canterbury and the Dioceses in which All Saints has been over the centuries, namely, Lincoln, Ely and St Albans. The remaining two show the coats of arms of local families, as does the large hatchment in the centre.

This handsome arch at the entrance to the chancel probably replaced an earlier Anglo-Saxon structure. Note the decorative nail head moulding, this was part of a string course that once ran round the entire interior of the church before the side aisles were added.

In the wall of the sanctuary to the right of the high altar is a double piscina, having two arches with a central supporting shaft, a feature not often seen, especially in a country church. 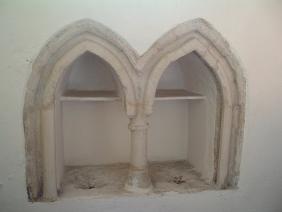 In 1840, workmen repairing the floor of the porch uncovered a large stone slab or gravestone, and three feet below, a skeleton. It is thought to be the last resting place of the local knight, Sir Giles Daubeney who died in 1386. The stone, with its unusual cross in the shape of a sword carved on the top, at present lies at the West end of the North aisle, in front of the altar.

Carved into the left-hand buttress at the entrance to the porch is a circle of small holes at regular distances from a larger hole in the centre, a straight line being scratched from each small hole to the centre one. This is known as a Mass Dial and was the forerunner of the modern Notice Board. A moveable pointer was fixed in the centre hole like a hand of a clock which was moved by the Priest as he left the building to show the time when the Mass was next to be said in church. It was in this way that the parishioners knew when to attend church. 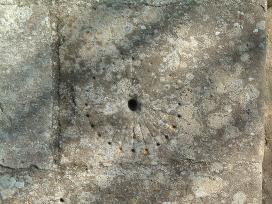 Above the porch is a room known at All Saints as the Priest’s Room. It was used as a vestry for several centuries. If observant visitors look carefully at the stonework above the window, they will see a small hole and, on fine days, honey bees going back and forth. These bees have had a nest in the roof above the Room for well over a hundred years. Recently, in 1992, the roof had to be replaced because the old one had rotted. The bees were captured and taken away. During the work the old nest was destroyed. Care was taken, however, to replace the roof as before and in May 1993 the bees were returned to All Saints, once more to occupy their ancient home.